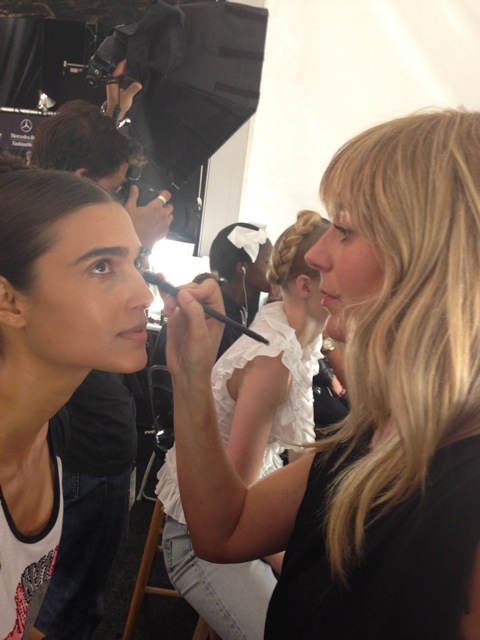 Whilst studying for just 3 weeks in London, Campbell’s Tutors quickly recognised her undeniable talent and natural gift for application, she was then whisked away from the classroom to the backstage of Paris.

And so it began!

Having had no formal training, Campbell learnt quickly, mostly on the job watching the greats of the makeup world.

Tom Peaueux, Val Garland, Pat McGrath, Charlotte Tilbury, Mary Greenwell, the late Kevyn Aucoin and Francois Nars, to name but a few she calls her mentors and is still fortunate enough to work with today.

Her first models, Kate Moss and Devon Aoki for Bella Freud’s fashion show in London was a chance to highlight her vast artistry skills and creativeness which fast established her amongst the industry elite.

Now with over two decades under her belt travelling to Fashion Weeks at all major global cities, Campbell is Val Garland’s go to artist, and a regular with the NARS teams.

Cam has accumulated an extensive client list over the years. Most recently working for Victoria’s Secret and Makeup Royalty, Dick Page.

With a range that stretches from clean and classic to dramatic and bold, Campbell’s versatility and creativity is unmistakable – few can rival her touch for flawless, glowing skin, said HUGO BOSS recently.

“Cam knows skin, she is undoubtedly one of the industry’s leaders in beauty.”

Campbell’s work can be found in a range of magazines and publications; she also makes time to contribute her journalistic skills to Men’s and Women’s health and beauty magazines.

Campbell resides in New York City, is currently working on a skin collection and is also in the process of writing a book.